You probably know the name, even if you’re not a wrestling fan. He’s that over-the-top owner of World Wrestling Entertainment. Love him or hate him, you can’t ignore him.

But this isn’t a story about wrestling. It’s about the fact that sometimes you find angels where you least expect them.

The story starts way back when I was little. My Dad was born in 1926, grew up through the Great Depression, and, like many people of that era, thought smoking was okay. He’d light up those non-filtered cigarettes that were so popular during World War Two, Lucky Strike.

I hated it. Mom didn’t smoke, and she hated it too. The smell, the dirty ashtrays, the yellow nicotine stain that seemed to cling to everything.

I tried all sorts of ways to make him quit. Hiding his cigarettes. Hiding the ashtrays. I hid his Zippo lighter but he simply went to the gas stove and lit up. He would send me to the corner store to buy a pack (imagine sending an eight-year-old out for smokes in this day and age) so one day I came up with another plan and told him they were out of Lucky Strikes. He just sent me back for a pack of Chesterfields.

Dad smoked for 40 years. And finally, one thing got him to quit cold turkey.

After the surgery he met with his doctor about what he needed to do as far as recovery was concerned. The doctor asked him what he did to relax.

“I love to play golf, and I watch the Mets.”

The doctor told him golf was great, but it turned out the physician was also a Mets fan and offered what might seem to be some bizarre advice. “You can watch the Mets, but when Doug Sisk comes in the game, turn the TV off.” Sisk was a relief pitcher who tended to load the bases before getting out of a jam, making the blood pressure of any Mets fan shoot up. So my Dad and I got into this routine even though I lived a thousand miles away. If Sisk came into the game, Dad would turn off the TV. Then I’d have to call him when Sisk was out. “Okay, you can turn the TV back on.”

But Dad was too young to quit working. Problem was, he’d run delicatessens all his life, and anyone who’s ever worked in the food business will tell you it’s not an easy job. Long hours, on your feet all day. I worked there summers and weekends all through high school and college and wanted nothing to do with it when I graduated. The doctor told him he could work, but it had to be a job that wasn’t physically demanding.

That’s when he spotted the ad.

As it turns out, World Wrestling Entertainment is headquartered in my hometown of Stamford, Connecticut.

They needed someone to run the mailroom. When my Dad showed up for an interview, they were thrilled that an actual adult had applied and hired him.

And this is where angels come into play. 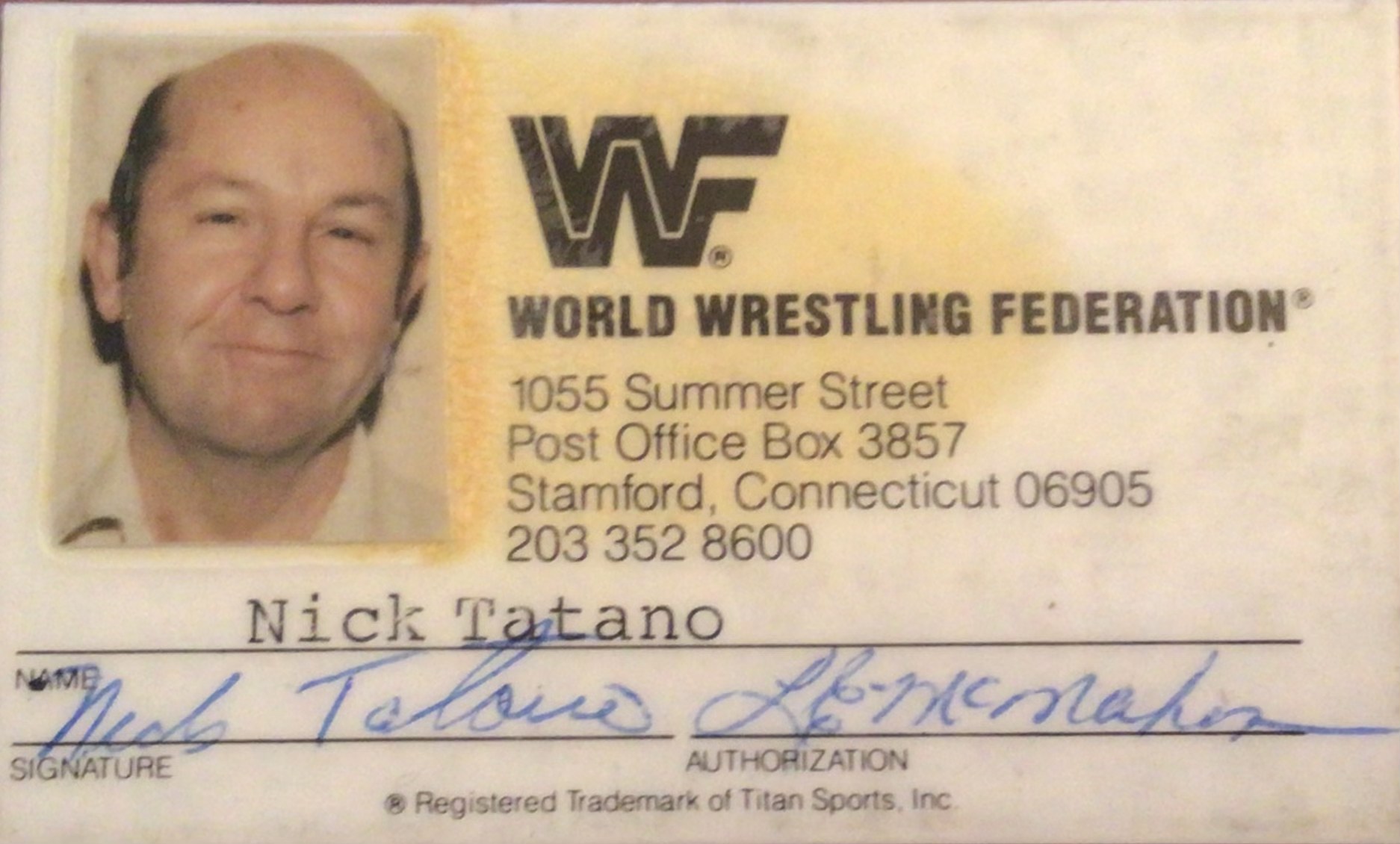 At this time in the 1980s the company was known as the World Wrestling Federation, and Wrestlemania had become a big deal. Within a short time Dad found he loved the job, mostly because of the incredible characters who filled the building. The mailroom was a hangout, and one of the regulars who became his friend was “Classy” Freddie Blassie, the white-haired manager who often whacked people with his cane during a match. It was a very relaxed atmosphere, with staffers often cooking out at lunch.

In addition to Dad’s job delivering the mail, he was also tasked with “getting rid” of merchandise when wrestlers left the WWF or items became old. Once Vince McMahon found out my wife was a teacher, boxes of stuff would show up for her students. We might get a batch of Macho Man t-shirts or Rowdy Roddy Piper pens.

This was all going along very well until Dad got whacked with a double whammy: kidney failure and a form of cancer called multiple myeloma. He could take care of the kidneys with self-dialysis three times a day called an “exchange.” But the cancer was something else. Fortunately, he ended up at the best cancer hospital on the planet, Memorial Sloan Kettering in New York, where he was told he had six months to live unless he wanted to try some experimental drugs. Being a gambler who figured he had nothing to lose, he took a shot and ended up getting an extra three and a half years.

But the home dialysis was becoming a pain. During his lunch hour he’d have to drive twenty minutes home, do the exchange, and then head back to work. People noticed he was no longer around for lunch, and once word got back to Vince, that problem went away. Vince had a room sterilized and gave my Dad the only key so he could take care of the dialysis on-site. He was also aware of the cancer situation, so he gave Dad a company car and a cell phone for emergencies. This was the late 1980s when hardly anyone had a cell phone.

Eventually, the cancer got worse and Dad started to miss a lot of time at work. The paychecks never stopped. No family leave law is necessary when the boss is an angel.

Dad spent the last 59 days of his life in the hospital. Again, the paychecks never stopped. People from the WWF would show up to visit. Freddie Blassie dropped by, whacked his cane on the side of the hospital bed, and yelled, “Nick! Get out of bed and start chasing these nurses!” But the kidney failure combined with the cancer was too much.

The day after he passed away I got a call from Vince’s assistant, offering to pay for the funeral. She also told me to send her any medical bills that showed up.

After the funeral I dropped by WWF headquarters to get Dad’s stuff and to thank Vince for treating my father so well. That guy you see on TV? Nothing like it in real life. Quiet and reserved, we had a good talk. At one point Vince said, “Your father talked about you all the time. He was really proud of you.” I got really choked up.

A week later a check showed up for fifteen thousand dollars with a note that I could use it to “take care of expenses.” That took care of the utilities, credit cards and a bunch of other things. But I could only imagine what those medical bills would be.

The first one I got was from the hospital. The charge for nearly two months was more than $450,000. Then the other bills trickled in. Doctors, medical treatments, tests, medication. After a month they finally stopped. I had a stack of bills nearly an inch thick, got out the calculator, and when I was done the total was around $675,000. I couldn’t even comprehend how to pay that.

But Vince’s assistant had told me to send her the bills, so I boxed them up and mailed them.

A month later I hadn’t heard anything, so I gave her a call. I heard the one line that changed my life. “We took care of everything.”

My dad wasn’t a famous wrestler, or a corporate vice president, or some other high-level executive. He was a blue-collar guy who ran the mailroom. And his boss took care of bills that added up to nearly seven hundred thousand dollars. I never paid a dime.

Seven years later I ran into Vince McMahon who was in town to promote an event and thanked him again.

Often the people you see on television are playing a part. Bottom line, wrestling is a good-versus-evil soap opera that is simply entertainment. Vince McMahon plays a character. But the person behind the character, the one you never see, is someone else entirely. His company does a ton of stuff for charity, stuff you probably don’t hear about. It’s a lot of the left hand not knowing what the right hand is doing.

Many years ago, a bell rang to start a wrestling match. And an angel got his wings.

Randy Tatano lives in Brewton and is the author of more than 20 novels, writing political thrillers under the pen name Nick Harlow, and romantic comedies as Nic Tatano. He spent 30 years working in television news as a local affiliate reporter and network field producer. The views and opinions expressed here are those of the author and do not necessarily reflect the policy or position of 1819 News. To comment, please send an email with your name and contact information to Commentary@1819News.com