People in Moody, Alabama, a small, middle-class city in rural St. Clair County, feel safe most of the time. The town is not a hotbed for gang activity. It is more prosperous than most towns its size and there is not a club scene or a lot of nightlife in the city, other than the Waffle House and the truck stop that boasts both a McDonalds and a Subway.

The city has a small professional police force where most residents know and interact with their officers on a daily basis. Despite this almost idyllic existence, Moody has not been immune to violence directed at law enforcement. The city has lost two of its police officers in the line of duty in just the last 23 years.

On Sunday, October 10, 2021, the City of Moody and the Moody Police Department dedicated a memorial to those two fallen officers: Officer Keith Turner and Lt. Stephen Williams.

“We would like to thank everyone who came out yesterday for the unveiling of the fallen officer memorials,” the Moody Police Department wrote in a statement. “We would also like to thank everyone who helped make this happen over the last year through all of your generous donations. Many of us will be traveling to Washington D.C. to honor the sacrifices made by these two heroes on a national scale.”

On the night of June 27, 1998, Officer Keith Turner was monitoring traffic on Park Avenue, in front of Moody City Hall, when he pulled over two motorists. Unknown to Turner, the two men he had pulled over were escaped fugitives from Mississippi. They had already assaulted the two elderly Mississippi officers that had been transporting them to a court date and had been involved in a shooting with Tuscaloosa Police Captain Cecil Lancaster that left the officer wounded.

The driver, Mario Centobie, (who had been a highly distinguished fireman before being convicted of kidnapping his ex-wife) pulled to the side of the road, exited the vehicle, and promptly opened fire on Officer Turner, hitting Turner in his bulletproof vest. The second round hit Turner in the hip, taking him to the ground. The vest would have saved Turner’s life, except that Centobie walked up to Turner and shot him in the back of the head, at close range.

Moody’s other on-duty police officer then arrived on the scene and the two fugitives fled on foot into the woods in the Carl Jones Road area of Moody. The passenger, Jeremy Granberry, who had escaped with Centobie, was captured the next day; but Centobie lived in the woods for eight days, defying a manhunt that involved over 2,000 officers.

After escaping the perimeter of the manhunt, he kidnapped a motorist and forced the young man to drive him to Mississippi. The young man escaped at the Mississippi welcome station and Centobie was captured. Centobie later escaped again with the help of an Etowah County jailer he was romantically involved with and was recaptured in Atlanta. He was executed by the State of Alabama in 2005.

Turner, who came from a family with a long history in St. Clair County law enforcement, had been on the Moody police force for just a couple of weeks when he was gunned down.

On the night of June 6, 2020, Moody Police Department Lt. Stephen Williams was shot and killed while responding to a 911 call from the Super 8 Motel on Moody Parkway.

When officers arrived, they were fired on by a heavily armed Birmingham couple, according to police. Williams was shot in the face and later died from his wounds at the hospital. Marquisha Tyson, age 28, and Tapero Johnson, age 27 — were taken alive by law enforcement after a lengthy standoff with authorities. Both have both since been charged with capital murder in the slaying of Williams. They are still awaiting trial.

Williams had been on the Moody police force for three years; however, he had 23 years of law enforcement service, including time at Bessemer, Calera, and Alabaster. He was very active in his community especially in counseling law enforcement officers on their mental health. Williams was the 2019 Moody Police Officer of the Year.

Both Officer Turner's and Williams' widows spoke at the dedications of the Law Enforcement Memorial. The memorial consists of two monuments in front of Moody City Hall. There is space there to add additional memorials, but everyone in Moody prays that that is never necessary. 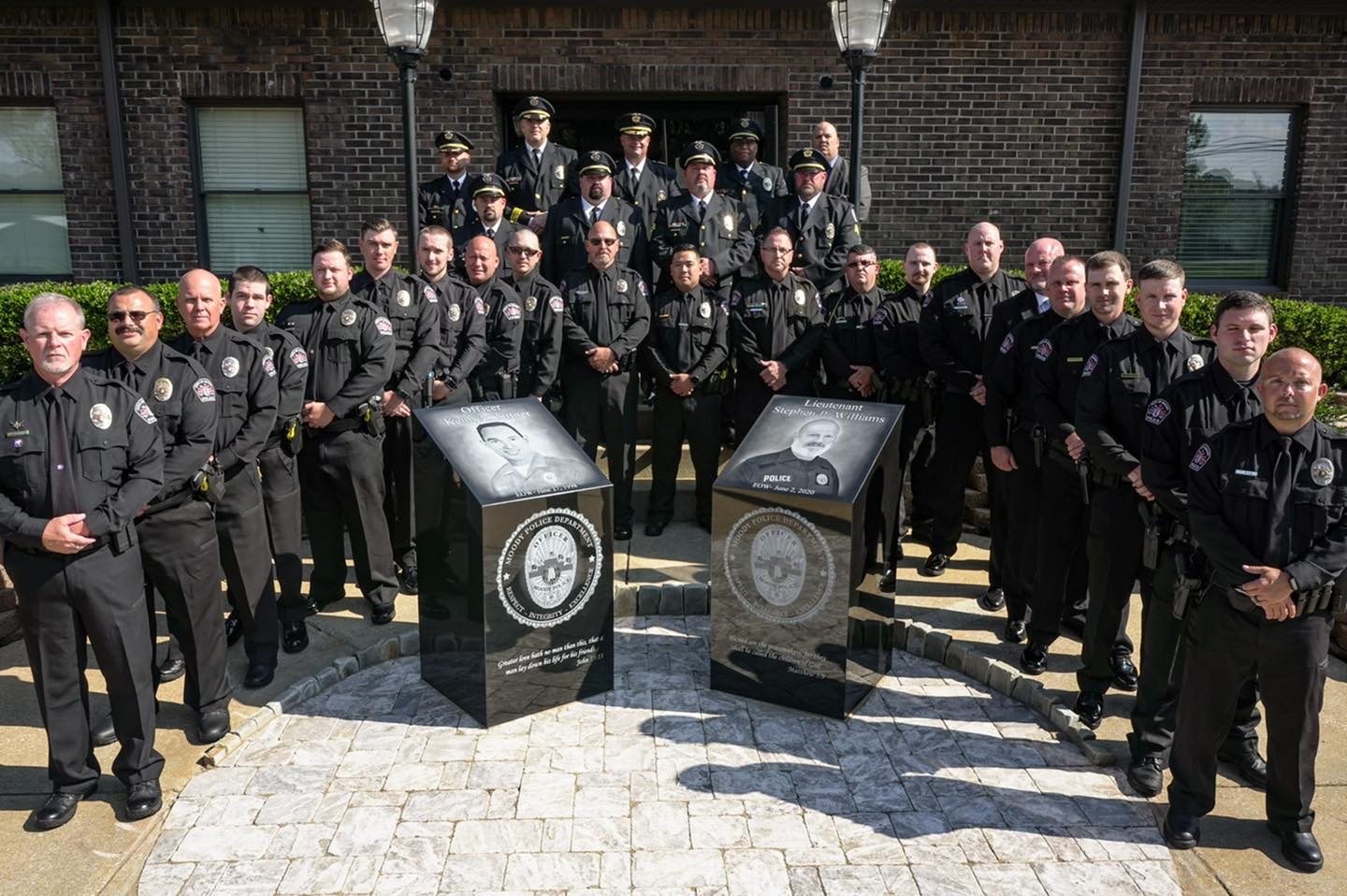