Rise to the moment of truth Monday, December 5, 2022
Politics

Scofield said that he has a great working relationship with Ivey.

“I am pleased to have a great working relationship with Gov. Ivey and am proud of the results we have been able to secure for Alabamians,” Scofield said in a statement. “It has been an honor over the years to work alongside her to deliver high-speed internet access to communities across Alabama, especially those in rural areas. The governor’s ambitious approach toward a range of issues will truly make a historic impact on our state’s future. From expanding broadband, improving our state’s roads and bridges and fighting for the conservative causes that Alabamians hold dear – the state of Alabama is delivering. The reelection of Kay Ivey as governor will ensure this growth and success continues.”

Rep. Ledbetter said that Ivey is a proven leader that is fighting for our values.

“Results speak for themselves – and in Alabama, our economy is thriving,” Ledbetter said. “The economic numbers we’re seeing are beyond question and I give Gov. Ivey a tremendous amount of credit for that success. I look forward to continuing to work with her to keep that economic momentum going. Across the nation, conservative values and the American way of life that we hold dear is under constant attack. Whether that be from the disastrous Biden Administration, left-wing radical indoctrination in our children’s schools, [or] the assault on our innocent, unborn children – the threat is real, and the stakes couldn’t be higher. That’s why I’m supporting Kay Ivey for Governor. She is a proven leader in fighting for our values, and she has the grit and resilience to make sure that none of that craziness finds a home in our state.”

Ivey thanked the Republican House and Senate Majority leaders for their endorsements.

“Majority Leader Scofield and Majority Leader Ledbetter are dedicated public servants and excellent leaders of the Republican Caucuses in their respective chambers of the legislature,” Ivey said. “I thank them for their endorsement and look forward to working closely with them for another term. Here in Alabama, we’re standing up for what’s right and defending our conservative Alabama values."

Ivey has received the endorsement of all members of Alabama House and Senate Republican leadership, including Senate President Pro Tem Greg Reed (R-Jasper) and Speaker of the House Mac McCutcheon (R-Monrovia). 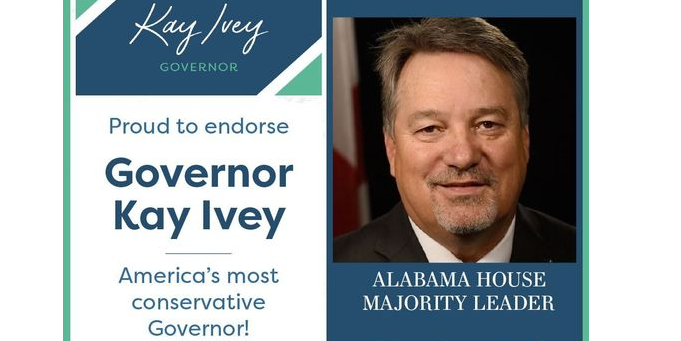 Does a leadership change, drop in GOP contributions suggest a new political direction for the Business Council of Alabama? Read now →