Rise to the moment of truth Saturday, November 26, 2022
News

Alabama’s Teacher of the Year received a substantial gift from an Alabama insurance powerhouse on Friday.

Reggie White was named this year’s Alabama State Department of Education (ALSDE) Teacher of the Year.

As they have done for the past 27 years, Alabama Farmer’s Federation’s insurance arm, Alfa insurance, has provided White with a brand new car.

The ceremony was held Friday outside the Booker T. Washington K-8 school in Titusville, where White teaches.

In the ceremony, administrators of the school cheered on White as he took the keys to his brand new 2022 Chevrolet Traverse, courtesy of Alfa Insurance.

A 5th grade teacher at Booker T. Washington, White has served his entire career in the Birmingham City School System.

White grew interested in an education career after taking a mission trip to California where he taught children how to read English.

After returning home from California moved by his experience, White saw a television commercial recruiting new teachers and answered the call.

Immediately after graduation in 1996, White moved to Birmingham to teach at Avondale Elementary School, eventually earning his National Board Certification in 2007.

"Being Alabama's Teacher of the Year is a huge honor that gives me an opportunity to serve as an ambassador for teachers and students across the state,” White said. “I am very grateful for Alfa, the Alabama Farmers Federation and the Teacher of the Year Program. This partnership will help me find new roads and reach more people.”

As the Teacher of the Year, White will vacate his teaching office at the Titusville school to be an ambassador for Alabama’s school system and the Alabama State Department of Education.

White will also be eligible to win the National Teacher of the Year Award.

The only teacher from Alabama to have received the National Teacher of the Year was Betsy Rogers, a teacher in the Jefferson County Public School System who won the award in 2003.

Charles Barkley rails against Alabama football fans — 'These guys have lost two games, and they think it's the end of the world' Read now → 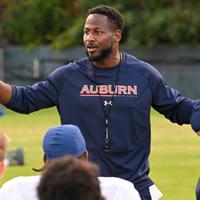