Rise to the moment of truth Tuesday, December 6, 2022
News

On Tuesday, a unique press conference was held behind a mobile home in a rural community 12 miles outside of Hayneville. On one side were the dignitaries, including EPA Administrator: Michael Regan, U.S. Agriculture Secretary Tom Vilsack, White House Infrastructure Coordinator Mitch Landrieu, the homeowner, and community activist Catherine Coleman Flowers, who has campaigned for federal intervention for wastewater issues in the Black Belt for 25 years. On the other side were dozens of members of the press as well as federal agency officials and members of the community. In the middle of the two groups was a sewage-filled hole where the family’s wastewater sits exposed to the elements. Fortunately it was not raining that day though the smell was omnipresent at the event.

“Conditions like this should not exist in America in the 21st century,” Vilsack told reporters.

The situation in Lowndes County was presented to the nation in a segment recently on CBS News’s ’60 Minutes’ news program that featured Flowers and her fight for environmental justice.

Landrieu told Flowers that President Biden had seen the segment and said, “Mitch, get down there and fix that.”

The officials announced that the Closing America’s Wastewater Access Gap Community Initiative will allow EPA and USDA—in close collaboration with local communities, state and Tribal partners, and on-the-ground technical assistance providers—to leverage technical and financial expertise to make progress on addressing the wastewater infrastructure needs of some of America’s most underserved communities. Each community or Tribe will receive direct support to develop wastewater assessments with technical engineering support and design wastewater disposal systems.

“By partnering with USDA, states, and leveraging funding through the Bipartisan Infrastructure Law, EPA is working to restore dignity and opportunity to rural communities here in Lowndes County and across the country,” said Regan.

Flowers said that this was a continuation of the Civil Rights struggle of the 1960s, of her parent's struggle. She warned however that previous charitable efforts to install septic systems resulted in failed systems two or three years after they were installed.

The problem with Lowndes County soils is that those same rich Black Belt soil, which for almost 200 years have produced bountiful cotton harvests and raised fat cattle, doesn’t perk, so residents cannot lawfully install a conventional septic tank system. Many residents have gotten around this by either installing their own rigged systems involving burying two or three fifty-gallon drums half filled with gravel to long field lines. The other is to simply run a long pipe out into the woods taking the waste away from the home. Both of these are illegal but are commonly practiced in the Black Belt.

In the case of the resident where the press conference was held, neighbors told 1819 News that the homeowner, when she had her late model mobile home brought in approximately seven years ago, used the long pipe method. Unfortunately, the pipe broke so the waste went into the yard where a holding pit was dug. The residents have to drain the pit almost daily. The mobile home next door did not have the same issue. The neighbors said that that home is owned by the sister of the resident with the septic pit and has a rigged system with barrels. They said that that system works well but that it can fail in about 15 years and is expensive to dig up and replace.

Congresswoman Terri Sewell (D-AL07), Alabama Agriculture and Industries Commissioner Rick Pate (R) and dozens of state and local officials, as well as residents, welcomed the Biden Administration officials at a town hall event in nearby Whitehall.

Alabama Department of Environmental Management Director Lance LeFleur told residents that $115 million in funds have been appropriated for fixing these issues in the Black Belt and that Lowndes and Greene Counties were among the first areas to be addressed.

Sewell said that hundreds of millions of federal dollars would be coming to the state for water issues over the next five years.

“Access to adequate wastewater infrastructure is a basic human right, but for too many of my constituents, generations of disinvestment have led to broken and failing wastewater systems that put the health of our communities at risk,” said Sewell in a statement. “Thanks to the leadership of the Biden-Harris Administration and transformative investments from the Bipartisan Infrastructure Law, more help is on the way. This joint initiative between the EPA and USDA will be instrumental in our fight to improve wastewater infrastructure for our most underserved communities.”

“Under the leadership of the Biden-Harris Administration, USDA believes hardworking people in America’s small towns and rural communities should have the infrastructure they need to be healthy and to provide for their families,” said Vilsack. “We recognize that there are still people who have been going without the basics. Access to modern, reliable wastewater infrastructure is a necessity, and the Biden-Harris Administration is committed to doing everything we can to ensure every family and every child in America has access to these vital services. By combining USDA and EPA resources and taking advantage of the historic Bipartisan Infrastructure Law, we can restore to these communities a sense of economic vitality and social dignity that the people living there deserve.”

“The Bipartisan Infrastructure Law provides $11.7 billion in loans and grants to communities for a wide range of water-quality infrastructure projects, including wastewater solutions for these communities,” Landrieu said.

An estimated 2.2 million people in the United States lack basic running water and indoor plumbing. Many more live with wastewater infrastructure that is ineffective and puts people’s health at risk.

The Biden Administration announced that the first projects targeted would be in:

Closing America’s Wastewater Access Gap Community Initiative will allow the EPA and the USDA to produce a roadmap to scale up efforts in the rest of the country. The EPA and the USDA each offer technical assistance that can help communities access funding through the Bipartisan Infrastructure Law and other government programs. 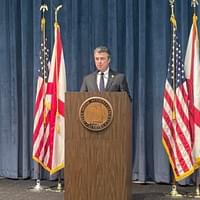 AG Marshall: No moratorium on capital punishment in Alabama — Condemns those sympathizing with killers Read now →