Reeves has been in prison for 23 years. He was sentenced to death for the 1996 murder of Willie Johnson, a Dallas County man.

Stavos Lambrinidis, a diplomat with the EU, released a letter to Ivey asking for her to stay the execution due to Reeves’ “intellectual disability”

Reeves was scheduled to be executed on Jan. 27, but on Jan. 7, a federal judge blocked the execution. Reeves filed a complaint against the Alabama Department of Corrections (ADOC), claiming the state violated his rights under the Americans with Disabilities Act (ADA) when they did not help him understand a form that would have allowed him to select an execution via nitrogen suffocation. Reeves has been determined as illiterate and has an IQ below 70.

“The European Union believes that the execution of persons suffering from mental illness or intellectual disability is particularly regrettable and is contrary to widely accepted human rights norms and standards,” Lambrinidis said. “In jurisdictions where capital punishment has not yet been abolished, we ask authorities to ensure that, at a minimum, the death penalty is not imposed on individuals suffering from mental illness or intellectual disability.”

While Reeves’ initial complaint against the ALDOC was his inability to choose his preferred method of execution, the EU is seeking to prevent his death altogether.

Lambrinidis clarified that, while Reeves’ crime was serious, it does not warrant reciprocation.

“With this letter, please allow me to express my deepest sympathy and support to the family and friends of Mr. Johnson,” Lambrinidis said. “At the same time, we also know that capital punishment can never mitigate for loss of life. This is why we have fully abolished the death penalty, while at the same time firmly standing by victims’ families and continuing to prosecute and to punish serious crimes rigorously and effectively.”

The decision released by U.S. District Court Judge R. Austin Huffaker stated that ADOC violated Reeves' rights by not explaining his options for execution. Huffaker stayed the execution and further prohibited any form of execution except nitrogen suffocation.

The Eleventh Circuit Court has yet to release its decision on Reeves’ execution. If the court rules in favor of the state, Reeves' original execution date of Jan. 27 could stand.

A copy of the letter can be found below. 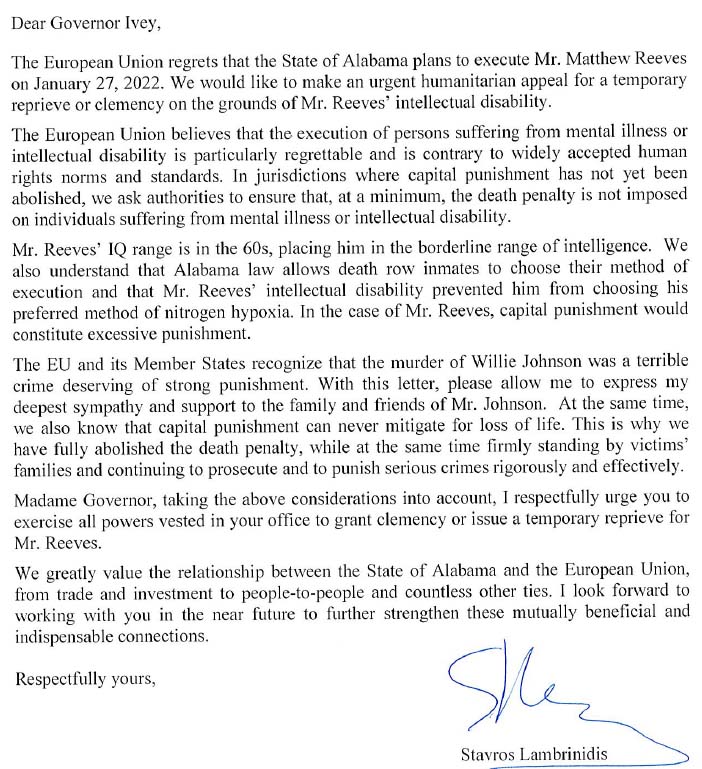