Jupiter is both the largest and the oldest of the known planets within our solar system. According to Juno Program Scientist Lucas Paganini, NASA’s Juno probe has been making “incredible scientific discoveries” about Jupiter for the last five years.

Juno, which was launched in 2011 by an Atlas V rocket made by United Launch Alliance in Decatur, is unlocking the secrets of Jupiter by measuring and probing its gravitational field, magnetic field, and polar magnetosphere. The probe is also providing high-resolution images that give us never-before-seen views of the giant planet’s turbulent atmospheric layers.

Jupiter, a world with 80 moons, is a strangely energetic planet that gives off more energy than it receives from the Sun. Juno was built by Lockheed Martin and is managed by the Jet Propulsion Laboratory (JPL) in California. Jupiter emits very high radiation levels, a fact that required designers to install heavy radiation shielding to protect the electronics carried aboard Juno. JPL said the probe is “armored like a tank” against Jovian radiation. 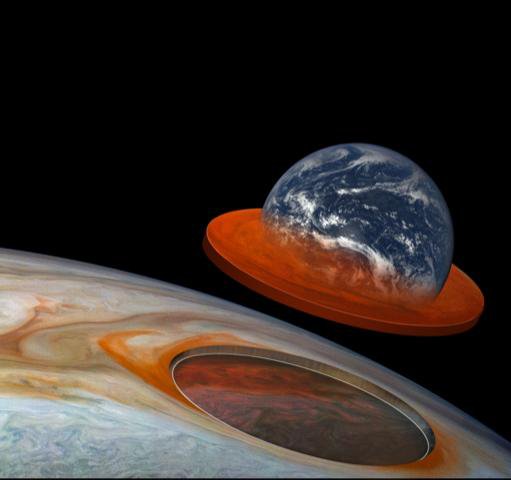 Science fiction fans will be interested to know that Juno has all but confirmed one of the late Arthur C. Clarke’s descriptions of the atmosphere of Jupiter. In his 1971 novella “A Meeting with Medusa,” Clarke imagined that the Jovian atmosphere would have complex layers and currents, which he called a “jovacline.” Juno principal investigator Dr. Scott Bolton revealed that Juno’s powerful multi-wavelength sensors had opened previously concealed deep cloud layers and revealed the likely existence of Clarke’s speculative “jovacline,” which is a feature similar to the thermoclines found in the oceans of Earth.

According to Juno scientist Keren Duer, the Great Red Spot seen in images of Jupiter is a 300-mile-deep storm large enough to swallow the Earth, and gravitationally affect the orbit of Juno as it passes overhead.

Juno’s mission has gone so well since it arrived at Jupiter in 2016 that it was given an extension of several more years to continue unlocking the secrets of a planet so large that the Earth and all of the other planets in the solar system could fit inside it. One remaining mystery is why Jupiter displays the beautiful reds, yellows, and other colors seen in its clouds.