Making its deepest run in the Alabama state tournament in school history, Oakwood was scheduled to play Faith Christian School Saturday afternoon in Jacksonville. The game was scheduled as the first of two games, to start at 4:30 pm.

However, Oakwood, as a Seventh Day Adventist school, observes its Sabbath Day from sundown Friday to sundown Saturday. Playing on the Sabbath is a violation of the school’s religious beliefs.

While Oakwood and Faith Christian had reportedly reached an agreement to swap starting times with the teams in the second game of the day, scheduled to begin at 7:30, the Alabama High School Athletic Association (AHSAA) refused to grant the team a religious accommodation, and the game was recorded as a 2-0 forfeit win for Faith.

Oakwood Athletic Director Calvin Morton said the AHSAA twice denied the request. The AHSAA’s only response thus far has been that “all games at each regional site are expected to be played as scheduled.”

Tuesday, Gov. Ivey announced that she had written a letter to AHSAA executive director Alvin Briggs to express her “profound concern” over the situation.

“I am writing to express my profound concern – and to get some answers – about the alleged treatment of the Oakwood Adventist Academy,’’ Ivey wrote.

She went on to say, “As I’m sure you know, few things are more important to Alabamians than their faith. And from my perspective as Governor, this is a very good thing. Sincere faith brings Alabamians together. It is a source of comfort during times of challenge. And it drives Alabamians to make their communities better. Indeed, a sincere commitment to faith is one of the defining hallmarks of our great state.

“With all this in mind, I hope you’ll understand why I was most disturbed to read [about] Oakwood’s alleged treatment at the AHSAA’s basketball tournament – and why this episode raises some very pressing questions, not only for me but for public officials and citizens across our great state.”

Ivey asked AHSAA if the public reports surrounding the matter were true, and, if so, how the treatment was allowed to take place. The governor also inquired with the association if the public backlash it would receive was taken into consideration when the decision was made not to accommodate Oakwood and concluded by asking how this situation could be avoided in the future.

Additionally, Ivey sent a letter to Oakwood Academy saying she stood in “solidarity” with its program.

“[P]lease convey to your team members and their coaches how proud I am of them for sticking to their beliefs,” wrote Ivey. “Their selfless display of sportsmanship in attending the playoff games at Jacksonville State University, despite their forced forfeit, to cheer on those teams that so graciously agreed to accommodate your team’s Sabbath observance, is an inspiring example to competitors and athletes everywhere. These young men, both on your team and the other affected teams, are worthy ambassadors for their schools and their communities.”

The governor invited the Oakwood boys’ basketball team to meet with her at the Alabama State Capitol.

Raynon Andrews, Oakwood's senior team captain, expressed his feelings that his religion was the most important thing.

"When God created the earth, on the seventh day he rested, he calls us to rest on that day and give that day to him," Andrews said to WAFF-TV. "I'm not going to play on that day no matter what, because it's bigger than basketball.

"People want us to play, they say, 'just play on Saturday,'" Andrews said. "But I got to stick to my faith and stand up for what's right and believe God will make a way for us to play." 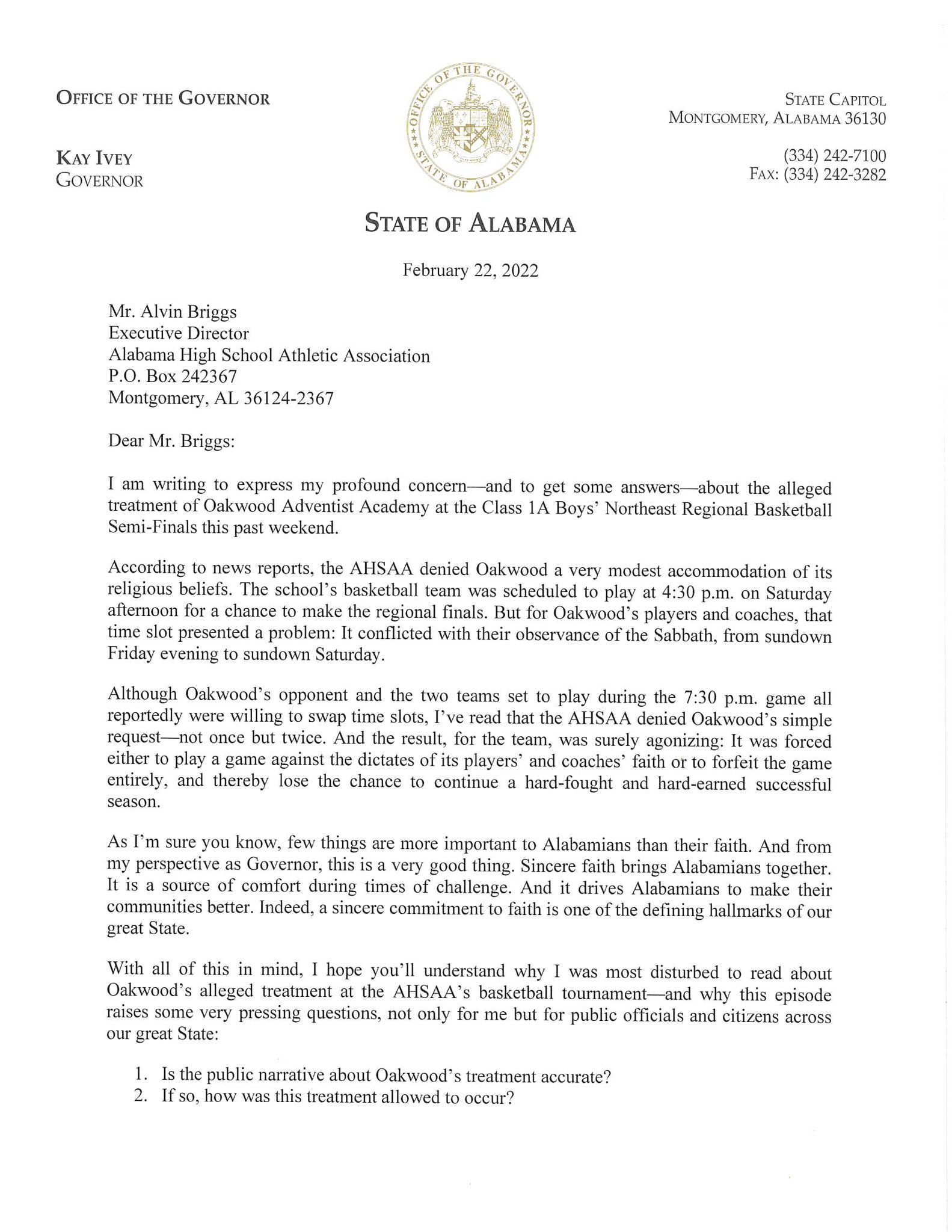 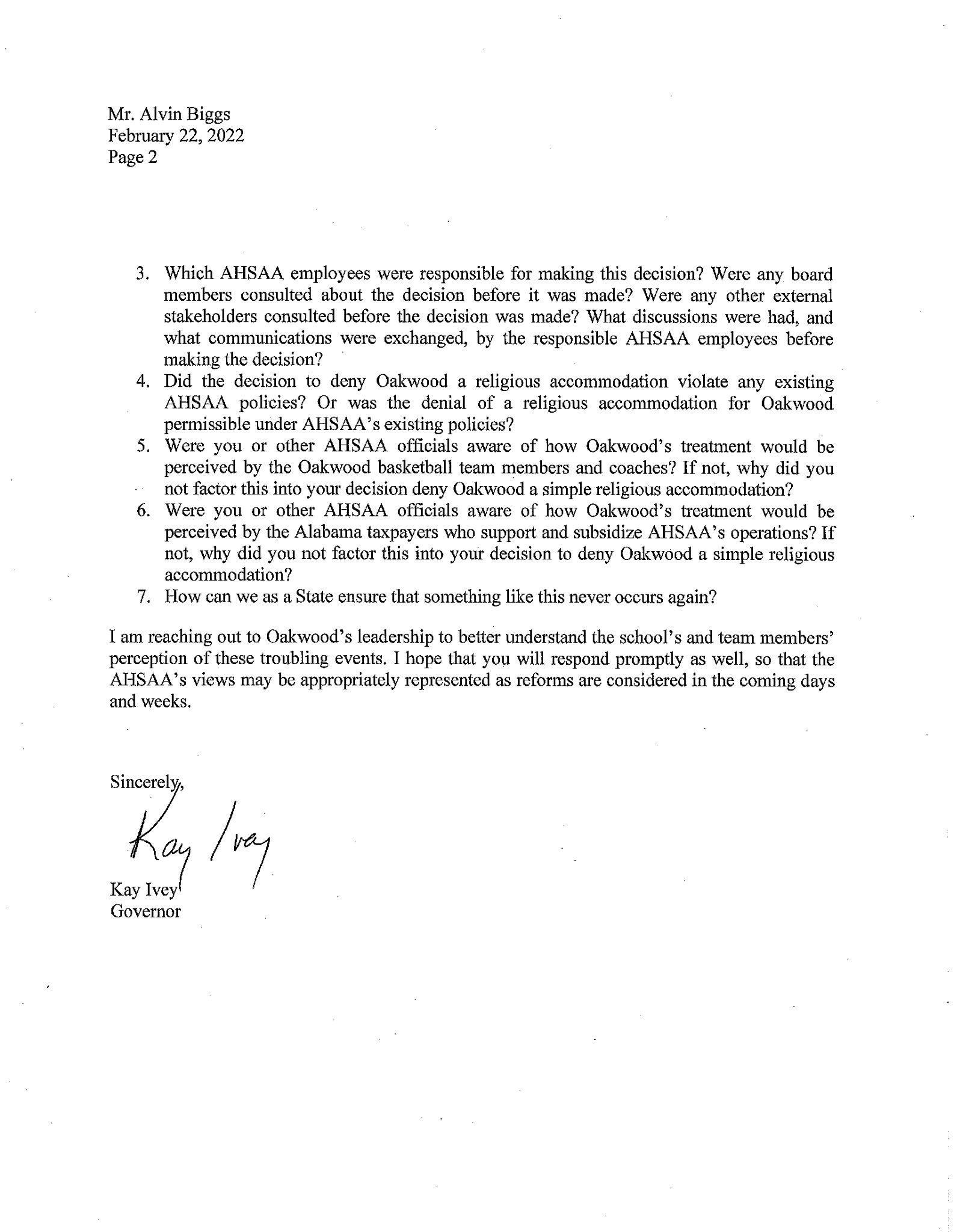