Rise to the moment of truth Friday, December 2, 2022
News

“As automakers make significant investments in electric vehicles, we know more and more motorists will consider purchasing one,” Ivey said. “In addition, automobile manufacturing is one of Alabama’s key industries, and we want to make sure that this economic engine remains vibrant for Alabama’s workers.”

ADECA Director Kenneth Boswell explained that the state will be launching a media campaign on TV, radio, the internet, and billboards encouraging Alabamians to purchase the new electrically-powered vehicles.

Ivey said that Mercedes will begin electric vehicle production at their Tuscaloosa County plant in 2022 and that Hyundai would begin building electric vehicles at their Montgomery production facility within a year. In addition to building electric cars in Alabama, batteries for the cars will be made in Alabama. The graphite for the batteries will be mined and processed in Coosa County.

Alabama’s inaugural marketing campaign, known as “Electric Gets You There,” stresses the cost savings associated with electric vehicles as well as EVs’ functionality.

Alabama House Minority Leader Anthony Daniels (D-Huntsville) praised Alabama’s educational institutions for getting behind and promoting electric vehicles. Daniels said that he looked forward to the day that he has an electric vehicle. 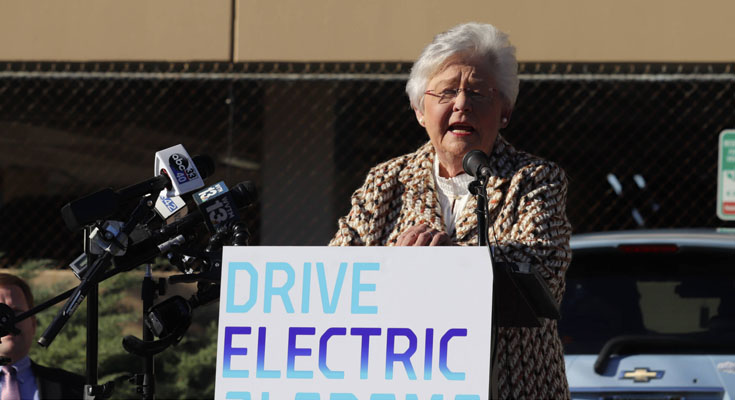 Michael Staley is the President of the Alabama Clean Fuels Coalition.

“Automobile manufacturers have announced billions of dollars in investments in EVs in the last year, but most Alabama motorists have questions about how far EVs can travel on a single charge, how often and where EVs are charged, and how much money is saved by switching from gasoline to electric,” said Staley. “These are questions Drive Electric Alabama and the ‘Electric Gets You There’ campaign can help answer and begin to normalize this transition from gas to electric for many Alabamians.”

Staley said the Drive Electric Alabama campaign is funded by a grant program authorized by the Trump administration and continued by the Biden administration.

Along with the campaign, ADECA is also developing a separate statewide infrastructure plan related to electric vehicles, which is expected to be completed by the end of the year.

State Sen. Gerald Allen (R-Tuscaloosa) and UAB President Ray Watts were also in attendance at the launch of the campaign.