The Houston Gamblers (2-7) handed the Birmingham Stallions (8-1) the Stallions’ first loss of the season, defeating the Stallions 17-15, on Saturday night at Protective Stadium.

Despite the Stallions outgaining the Gamblers 329 yards to 187, it was key plays by Houston’s defense that was the difference in the game. A Houston safety in the third quarter, and a timely interception by the Gamblers’ defensive back Micah Abernathy with 1:22 remaining in the game sealed the contest and gave the Stallions their first loss.

“We knew they had to make a big play.," said Abernathy, of the interception at the end of the game. "We knew they were going to go to one or two people, and that’s what they did. We tried to disguise it as best as could, make them throw one up and that’s what happened."

The Gamblers were led by quarterback Kenji Bahar, who completed 16 of 24 passes for 164 yards. Tyler Palka was on the receiving end of six of those passes, logging 83 yards through the air. The Stallions held the Houston rushing attack in check, allowing only 29 yards on the ground.

Defensively, Donald Payne led the Gamblers’ defense with 12 total tackles, one tackle for loss, and a pass breakup. Abernathy notched nine tackles, including a key stop near the goal line that forced a Stallions field goal attempt. The Gamblers held the Stallions' rushing attack to just 78 yards and held starting running back Bo Scarbrough to just 31 yards for the game.

“There hasn’t been a game where these guys quit,’’ said Houston coach Kevin Sumlin. “Even last week, we were going down the field at the end of the game. So, I just told them how much I appreciate their effort. It’s hard to give that speech every Monday or Sunday but it had to change sometimes, and the ball had to bounce our way. I just appreciate their effort and continuing to play hard.”

Birmingham head coach Skip Holtz said, “Winning is hard in every league at every level. You get what you deserve, and you get what you earn out here. And Houston earned that win today. I give them kudos and an awful lot of credit in how hard they played and what they did. We’ve got to clean some things up.”

The Birmingham Stallions take on the Tampa Bay Bandits next Saturday, June 18 at 3 PM, and the Houston Gamblers face the New Orleans Breakers on Sunday, June 19 at 7:30 PM. All games are at Legion Field next weekend.

“The New Orleans Breakers are fired up about going to Canton, Ohio, and competing for the inaugural championship,” said Larry Fedora, Head Coach of the Breakers.

New Orleans will now face Birmingham in the first round of the USFL playoffs on Saturday, June 25 in Canton, Ohio.

Defense proved to be the key to victory as the Breakers forced four turnovers and tallied three sacks and 14 tackles for loss to capture the win despite being held to only 215 yards of total offense. Safety Greg Eisworth and linebacker Jerod Fernandez shared the team lead with eight tackles a piece, and the pair combined for three tackles for loss and three forced fumbles.

Quarterback Jordan Ta’amu did all he could to keep the Bandits in the game, passing for 288 yards and a touchdown on 22-of-39 attempts, while rushing for a team-high 86 yards. His 288 yards were the second-most in a game this season for Ta’amu. Tampa Bay receiver Rashard Davis notched his first 100-yard performance of the season with 112 yards and a touchdown on six catches (18.7 avg.).

The Philadelphia Stars (6-3) won their fourth straight Sunday night, defeating the Pittsburgh Maulers (1-8) with a go-ahead touchdown late in the fourth quarter. Philadelphia holds one of four spots in the USFL playoffs and is set to play the New Jersey Generals in round one in Canton, Ohio on Saturday, June 25.

The back-and-forth matchup was as close on paper as the score portrays, as both teams played stout defense and forced a combined eight punts and only 470 total offensive yards between the teams. The difference in the game came in the turnover column, with Philadelphia forcing four Maulers fumbles in the game.

Offensively, quarterbacks Case Cookus and KJ Costello split snaps for Philadelphia, combining for 131 passing yards, but the offense was driven by running back Matthew Colburn II who led the team again with 97 rushing yards and one touchdown on 12 carries (8.7 avg.).

The New Jersey Generals are the top rushing team in the USFL.

However, with the Michigan Panthers slowing them down up front, the Generals turned to Darrius Shepherd and the passing game.

Shepherd finished with eight catches for 99 receiving yards, including the game-winner — a 17-yard touchdown on a fade route that gave the Generals a win over the Panthers on Saturday at Protective Stadium.

The victory clinched the North Division title for New Jersey.

"I’m just proud of our team for finding a way to win," Generals head coach Mike Riley said. "It looked kind of bleak for a bit. I felt it on the sidelines. But when we needed to stop them, and we needed to make some plays offensively, we did it." 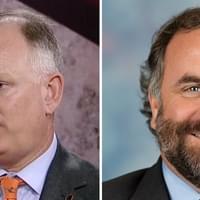