Rise to the moment of truth Thursday, December 8, 2022
Opinion

Caylah Coffeen: Blurred lines and a generation of plummeting trust

President Joe Biden is meddling with Congress. He wants them to get rid of the filibuster so debate will end, and Democrats can pass the John Lewis Voting Rights Act and the Freedom to Vote Act.

What’s actually in these laws, which claim to end “voter suppression?”

First of all, an ID will no longer be required to vote. Mail-in ballots won’t require signatures, plus more audits, requirements for paper records, exposure of campaign donors, updates to voter registration, the ability for individuals to sue over the certification of results, a process to oppose gerrymandering, rules for Federal Election Commission investigations, and more.

It’s confusing to keep straight. It feels like there are a million rules. The average person, when reading through this long list, will likely get bored with all the bureaucratic nonsense and just take away one idea: racism. That’s what liberals want. They don’t want us to think. Most people on social media have no idea what’s in these bills, and don’t care if any Democrats offer any proof that minority votes have been suppressed. If you say it enough, people will believe it. It’s a lot easier to be swayed by a straw man and an “appeal to pity” argument than to think of the big picture and realize this is yet another fight between federal and state power.

To enforce and manage this hot mess of rules, they’ll need a huge staff of federal employees.

I’ve never forgotten how my father once theorized, “why did Democrats support prohibition?” They hated the religious crowd; they didn’t do it for morality. They sought greater government control and, specifically, they wanted a huge new base of federal enforcers. They knew the law wouldn’t last, so once it ended, they’d have a mass of federal cronies they could shunt into other areas of ever bloating government control.

In recent years there has been an increasing rejection of America’s traditional ideas, structure, and founding documents. An ongoing dismantling of language itself has made individuals more and more willing to rewrite their own meanings into every area of life and politics. Sometimes, this is a good thing. Alabama itself has recently rewritten our constitution to remove genuinely racist language and clarify confusing, protracted content. Both parties periodically talk about removing the filibuster - it’s not the proposal itself that’s disturbing, but the thought that the executive branch could start bludgeoning other branches into suiting its agenda.

Does the average American really want the branches of government to start blurring? We assume young Americans are more willing to reject old ideas but is that really true? At a certain point, it’s not a matter of opinion or ideology, but about trust. Do you trust the government to make the changes that you want, in a way that actually helps and protects you?

I turned to polls to find the answer. The Pew Research Center shows that trust in the government has steadily declined since 1960, reached the lowest point during the Obama administration, and rising when Trump reopened the economy after COVID. Trust has decreased somewhat under Biden.

I also looked to see which branch of government different generations most trust. The results surprised me. Executive power has expanded in recent years, with much more focus placed on the president and the image of his office. I expected young people to trust the executive branch the most, but that wasn’t true. A University of Texas/TEXAS Tribune poll showed younger citizens trust the executive branch the least, while older generations placed far greater trust in the president. Congress is the least trusted branch of government across all generations. 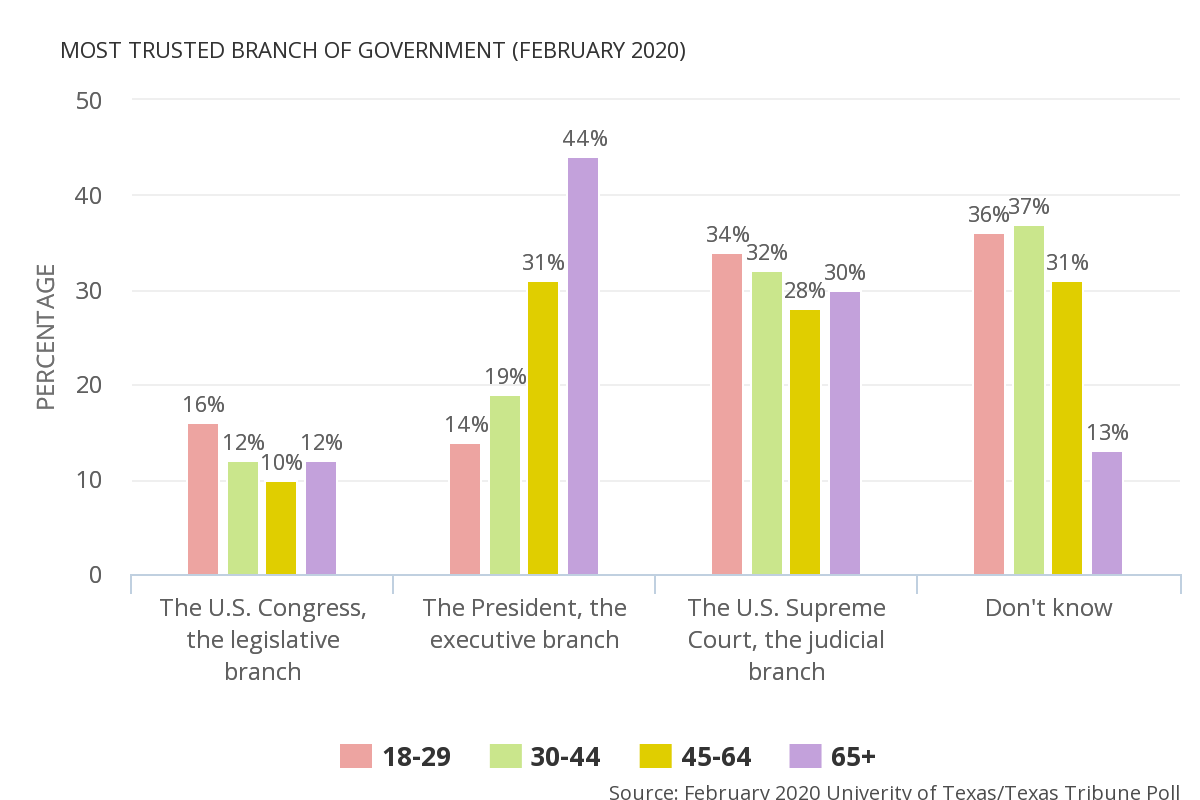 These results were supported by a Gallup Poll, which showed a huge plummet of trust in Congress since the Obama administration. Prior to his time in office, faith in Congress averaged close to the other two branches. On average, all generations showed a solid trust in the judicial branch, perhaps because of their greater reputation for neutrality, though 2021’s bitter fight over abortion seems to have hurt this impression. 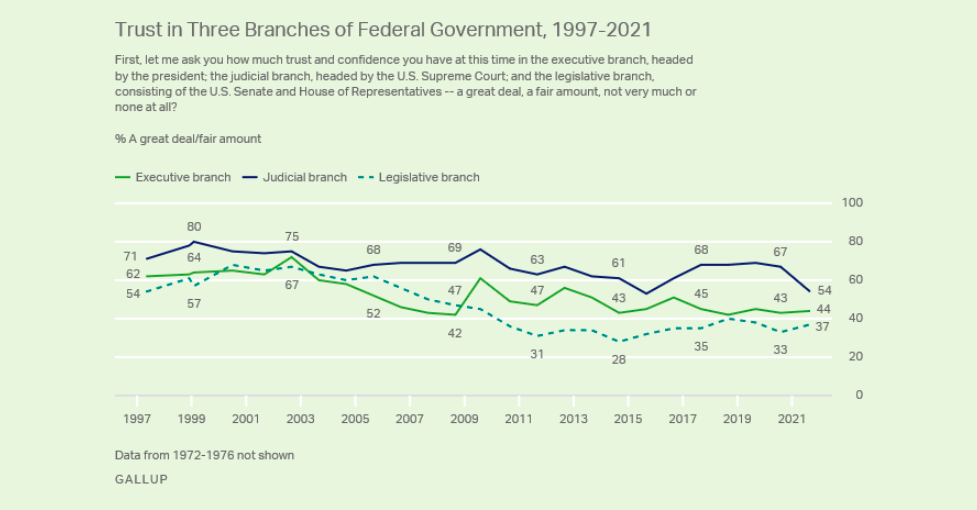 These results have me scratching my head. The opinions don’t add up. If Americans, especially younger generations, have so little faith in Biden and Congress, why do they take the word of leaders when it comes to “securing voting rights?” Why is it of no concern when the different branches of government get in each others’ business?

I wonder if there’s actually a different definition of trust at play here - liberals don’t trust the “system” or the “rules.” They trust individuals who agree with their opinions. Even if their leaders don’t impress them, they still trust people more than the pillars supporting them. They believe humans like them are fundamentally good, so won’t abuse their power. The evil “they” in the shadows, and the laws themselves, are untrustworthy. Conservatives don’t make such a distinction. The government is people. People make the rules, and support or exploit them, and cannot be trusted with unchecked power. No matter the rules, humans will find a way to hurt people and place their wants over the needs of others. The rules were put in place to guard us from inevitable mistakes. If liberals think adding or removing laws will make people better, they’ll be sorely disappointed. God already proved that doesn’t work. It’s not the law that’s at fault, it’s us.

Change is not wrong in and of itself. It’s sometimes necessary to adjust the structure of laws while retaining their core truths. Even the hermeneutical application of biblical law has changed over the centuries. New laws, by themselves, won’t heal the wounds of the past or remove fear and distrust - especially if heavy-handed rulers abuse their position to force such changes. Trust is cultivated. Leaders must be proven. Laws must be tested. An easy fix is a lie. In a House divided against itself, we need to return to the foundation, and fill the cracks with plaster. Tacking on a heap of shingles and facades will only cause the beams to splinter.

Caylah Coffeen is a Millennial in Huntsville, AL who knows how to think and speaks up for the sake of truth and a future as bright as the stars. Her column appears every Friday in 1819 News. The views and opinions expressed here are those of the author and do not necessarily reflect the policy or position of 1819 News. To comment, please send an email with your name and contact information to Commentary@1819News.com