Rise to the moment of truth Friday, December 2, 2022
Opinion

Today, I bring you a report on the latest gender battle.

Casualties: human decency, sanity, and the reputation of Christians

This spontaneous skirmish began with the wayward shot of one Christian pastor, Brian Sauve. He posted on Twitter: 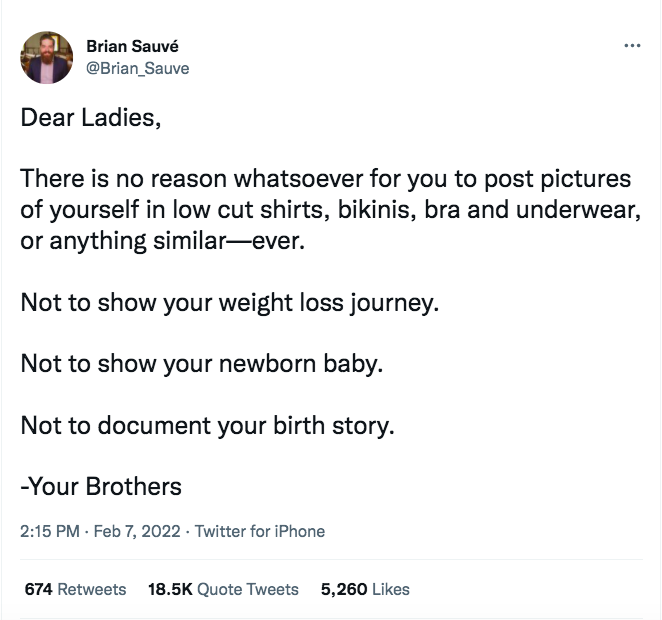 Of course, Twitter completely flipped. “Dear Brian” trended all day Monday with scores of people sending him pornographic material, calling him names, saying he popped out of the Handmaid’s Tale, you name it. Adidas sent him a mosaic of topless women which they’d used to advertise their sports bras and “celebrate all women’s bodies.” People accused him of not being able to control his sexual urges.

Now, I’ll say off the bat that this kind of behavior is despicable. And I’m also tired of seeing women sexualize themselves in the name of empowerment, denying how such depictions degrade all women. But I wouldn’t proclaim such a statement on social media and expect anything to come of it but a nasty fight. Who was Brian trying to reach? Was he really trying to foster Biblical modesty and an understanding between Christian men and women?

If so, why would he phrase it in such an aggressive and impersonal way on Twitter, of all places? He’s a pastor and educator. He has plenty of opportunities for nuanced, Biblically sound discussions in both groups and one-on-one discipleship situations. He could reach out to parents and from the pulpit to discuss chastity, sexuality, and God’s vision for behavior. Now, I completely understand how frustrating it is to have to watch our words all the time, and sometimes you just want to let out your thoughts without worrying about hurting peoples’ feelings and putting your foot in the woke mob’s nest.

But leaders are held to a higher standard. Did Brian really think this post would result in a godly discussion and encourage women to think about how their attire affects their brothers in Christ? I used to resent these teachings. As a little girl, I got sick of teachers and parents telling me to wear pants and a long shirt at pool parties, while the boys ran around shirtless. It wasn’t until my brother gave me some vulnerable insight into male experiences that I got an inkling of how difficult it is for men to remain sexually pure in a world that bombards them with sexual content. I had compassion on my brother and if Brian had taken a similar approach, I’m sure he could have actually reached some hearts. But he did not attempt to explain the significance, share anything personal, or seek any understanding with the women whose actions he would dictate. Did he hope Twitter would cancel him, so he could win the Christian conservative martyr badge?

I don’t have a problem with his opinion, but with how he approached this issue. Looking at some of his other tweets, he does not sound like a Christian man, opening his heart and the teachings of Scripture with all love and understanding. He has a long thread explaining how husbands can get their wives to repent for being disrespectful. He says he “wants to vomit” at the thought that women could be good leaders, saying God did not equip us to rule, and we are just as unfit for leadership as men are to breastfeed, as though we have a physical or mental deficiency in the area. I know my Bible. In Genesis and the very first chapter of the Bible, God tells both Adam and Eve to rule over the Earth and to fill and subdue it. He does not tell men to rule, and women to fill. Does Brian mean women aren’t to rule over men in the Church and in relationships (as the Bible actually says), or in society at all?

Is he perpetuating one of the greatest misinterpretations of Scripture and the following logical fallacy?

God called men to leadership in the Church and household.

Women are not men.

Therefore, women are not called to be leaders in any area of life.

… therefore women are biologically deficient in the area of leadership?

This type of vague and impulsive messaging is what gives Christians a bad name and can confuse both congregants and seekers about what God really says. And that’s what really matters in the end - not what men or women believe or feel, but what God says. When I say I believe the Word is perfect, reviving the soul, I mean God’s Word is perfect, not men’s interpretation of it. I did not see Christ in any of Brian’s words.

I’m not the only Christian who had an issue with his use of Twitter to throw bombs. In fact, I was more grieved to see the vitriolic responses from Christians than from non-Christians. I’d expect the latter. I’m heartbroken to see us tearing each other apart in the public arena, and even more disappointed that a pastor is the one who opened the door for such an unpleasant fight. We’ve seen liberals turn on each other for any deviation in belief about gender and sexuality. You could be a flaming socialist and atheist, but the moment you say something a transgender person dislikes, the wolves will tear you to pieces.

In any area of theology or history, Christians on the whole are willing to admit that mistakes and sin are rampant. You name it: the nature of man, conquest, slavery, the nature of God. We’re willing to confess that we sin when trying to understand the Bible and that our interpretations are rife with our own desires. We’re willing to admit that our conversations themselves are imperfect and must be ruled by the grace of Christ if we are to achieve any unity. But I have never heard any church leaders willingly admit such imperfections in the area of gender interpretations. Brian would disagree with some of my interpretations of Scripture, but must our theological differences tear Christians to pieces, just as surely as differences rend non-Christian alliances? What is it about this topic that has the whole world bitterly at war with one another?

Do Pastor Brian’s words in any way uphold the command in Paul’s letter to the Ephesians where he says, “I urge you to walk in a manner worthy of the calling to which you have been called, with all humility and gentleness, with patience, bearing with one another in love, eager to maintain the unity of the Spirit in the bond of peace … Let no corrupting talk come out of your mouths, but only such as is good for building up, as fits the occasion, that it may give grace to those who hear.” (Ep 4:1-3, 29).

It grieves me to see this because the world is watching. Regardless of the topic (gender, race, family, education, etc) the media wants to know what we have to say because they’re waiting to destroy us. They want to uproot our leaders or undermine them in front of us. They want voters who hear that a candidate is a Christian to balk. As Alabama approaches elections for Senate and Governor (packed with female candidates), what beliefs will guide us? More importantly, will conservatives let ourselves become a house divided and destroy our reputation with such vitriolic content? Younger generations, many just now coming of age, are approaching the first important elections where their vote will count. These youth often care more about the character behind your words. If we cannot trust you with our fears, our deepest thoughts, and our vision, we will not vote for you, and we certainly will not submit ourselves to your pastoral care.

Dear Brian, dear leaders, I respect your opinions and your passion. If you think I’m just another liberal kid trying to force your words into the woke mold, you’ve heard nothing I’ve said. I only urge you, please remember those you have come to serve, and that your purpose is for Christ first, and not yourselves.

Caylah Coffeen is a Millennial in Huntsville, AL who knows how to think and speaks up for the sake of truth and a future as bright as the stars. Her column appears every Friday in 1819 News. The views and opinions expressed here are those of the author and do not necessarily reflect the policy or position of 1819 News. To comment, please send an email with your name and contact information to Commentary@1819News.com.