Rise to the moment of truth Thursday, February 2, 2023
Politics

“I am happy to offer myself to my fellow Alabamians as a Republican candidate for the office of Secretary of State in the upcoming May 24, 2022, primary election,” Packard said in a statement. “I bring to bear in this contest 30 years of experience working with elections in Alabama and North Carolina and nearly 29 years of experience working with Alabama elections alone.”

Packard said he believes elections should be free and fair.

“Alabamians should not have to be concerned about whether our elections have integrity and credibility," Packard said.

As Secretary of State, Packard added he would champion a number of reforms, “toward the end of maintaining confidence in the electoral systems of Alabama.”

This is the outline he provided:

1) Post-Election Procedural Audits – The Alabama Legislature should provide for post-election procedural audits for all elections held in the state of Alabama. These audits would provide an understanding of how well our election administrators have performed in conducting our elections. Specifically, these audits would assess how well election administrators have implemented our state’s election laws, regulations and procedures when conducting an election.

2) Integrity of Voting Machines – The Alabama Legislature should take action to prohibit telecommunication devices in our voting machines. Voting machines used in Alabama should not have the capability to connect with remote devices that could potentially compromise the integrity and credibility of our elections. This prohibition should cover not only conventional telephone modems but also Bluetooth, near-field communication, and any equipment that would provide connectivity to the internet.

3) Securing Personally-Identifying Information – Alabama law currently protects personally-identifying information in the state voter registration database for persons who have been the victim of domestic assault or who are a prosecutor, judge, legislator, or law enforcement officer. Citizens, in general, should also have the right to protect their personal information in the statewide voter registration database by opting out of the sale of that information by the Secretary of State.

Packard has worked in the Elections Division of the Secretary of State’s office.

Packard faces State Rep. Wes Allen and Republican activist Chris Horn in the Republican primary. Candidate qualifying does not end until Jan. 28 so more Secretary of State candidates could still announce their candidacy for the office.

The Republican primary is May 24. 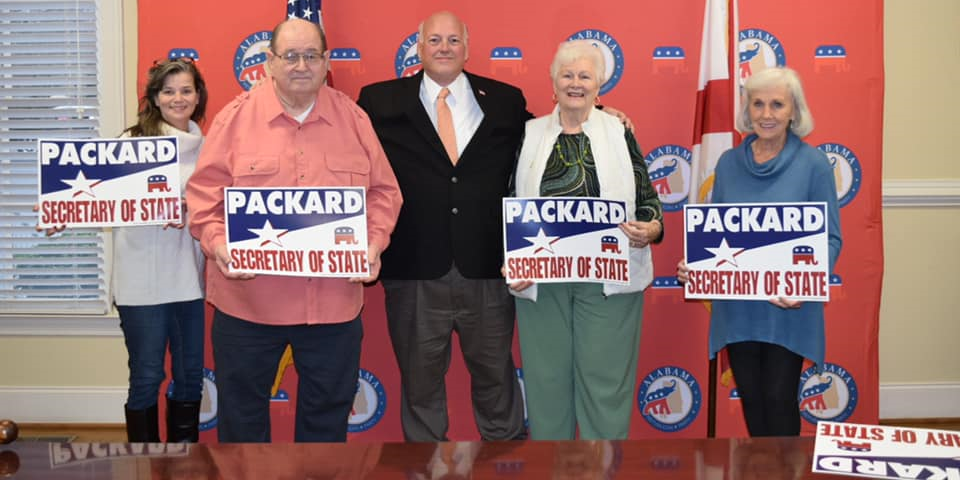