Rise to the moment of truth Monday, January 30, 2023
Opinion

Randy Tatano: Dreaming of a White Christmas? Be afraid. Be very afraid.

This time of year, the chance of snow on Christmas Day in Alabama is pretty much a long shot. Sure, we’ve had an occasional dusting and an inch or two, but generally not even enough to make a decent snowman. About the only significant snow you’ll see in this state is on Christmas cards or traditional holiday movies like It’s a Wonderful Life. (Or, in my case, Die Hard 2.)

I have many friends here who think it would be wonderful if we got some snow on December 25th.

Be careful what you wish for.

I’ve never liked snow. I dealt with it enough growing up in a New York City suburb. My winter nemesis was our ridiculously long driveway I had to shovel time and again. I never had any desire to ski, ice skate, or go sledding. My only winter sport was a snowball fight. The most we ever got was eighteen inches.

So when I took a job in upstate New York back in 2002, I knew I’d be dealing with the white stuff again. But I had no idea what a difference being three hours north of the Big Apple would make.

Christmas Day arrived and it started to snow. Light at first, and then heavy. Everything started to look like a Christmas card. My wife, who is from Alabama, had seen snow a few times on our annual trips to visit my family, but nothing like this. She kept staring out the window, fascinated by a real white Christmas, commenting on how pretty it was making everything look.

Yeah, it’s pretty until you have to deal with it.

The snow started falling at the rate of four inches an hour, and I knew getting to work the next day would be a nightmare. Because I noticed one thing was missing.

I hadn’t seen any snow removal equipment all day. Now New York has snow removal down to a science, but something was wrong in this suburb of Albany. No plows, so sand tucks, no salt trucks. Any cars that drove by simply packed down the snow onto the street.

By the time I went to bed, I saw a white blob in the outline of my car. Another larger white blob told me the location of my wife’s minivan. I would have to get up very early.

I got up at five, put on my Nanook of the North outfit, and began digging out of the house. Yes, you read that right. By the time I had cleared the steps leading to the driveway, I noticed that my friend Ray, who owned a plow, had cleared it. Best gift I received that year. I made my way to the minivan, easy to spot thanks to the radio antenna sticking up, and began clearing it off. I stuck a yardstick in the snow. 28 inches. By the time I made it to work, I was exhausted. To add insult to injury, when I got home, the plows had come through and blocked the driveway, so I had to dig my way back in. 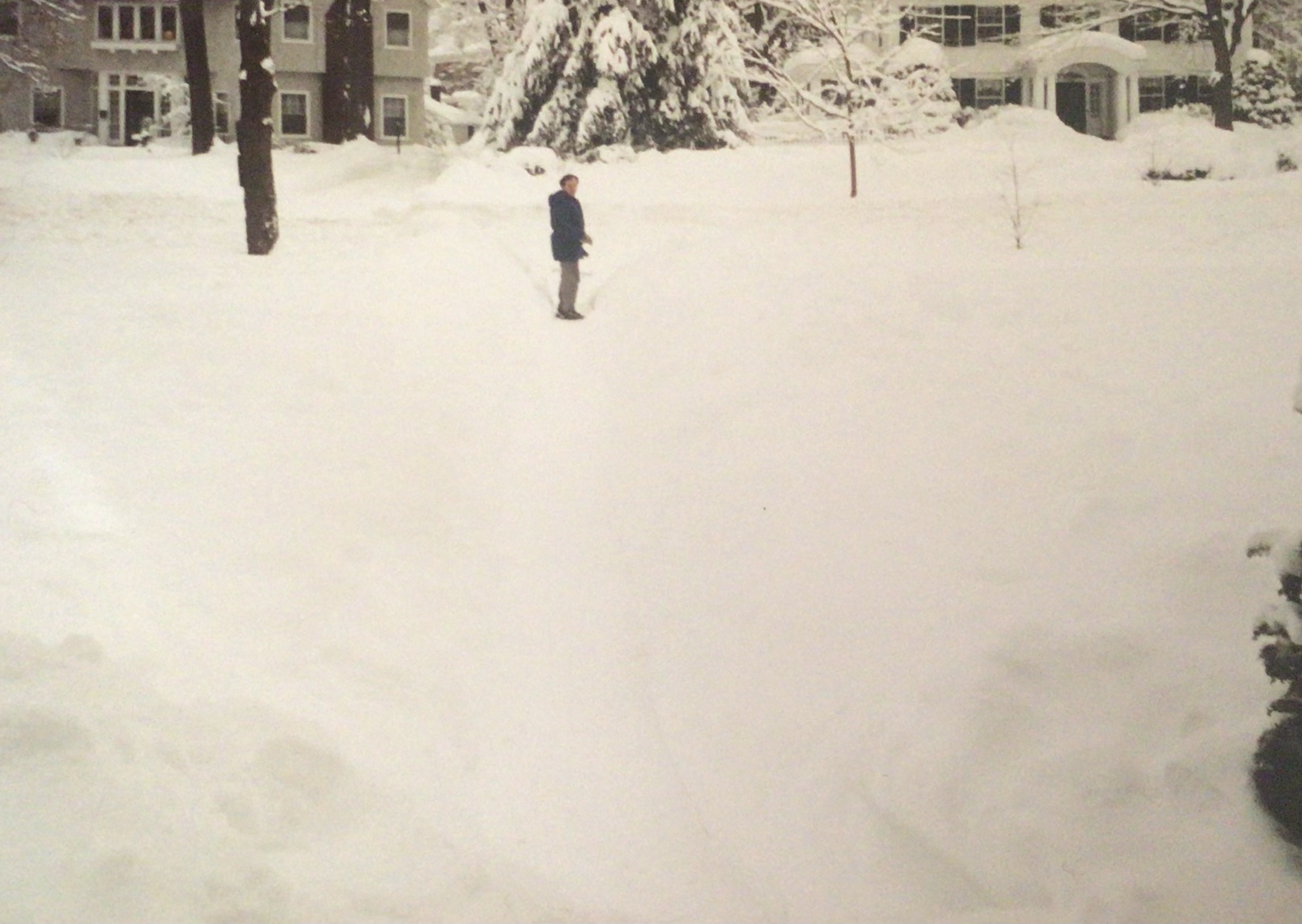 That day a reporter asked a city official of our suburb why the snow hadn’t been cleared, and the reason was that the snow removal people were members of a union and would have to be paid triple time for working on a holiday. His quote would come back to bite him, when he talked about the odds of this much snow falling on a holiday. “You and I will be pushing up daisies before this happens again.”

And, since karma loves to make people look stupid, we got whacked again with about two more feet of snow on New Year’s Day. Again, no snow removal trucks visible. That pesky triple-time thing. Ray plows the driveway. I dig my way out of the house. I dig my way back into the driveway when I get home. Rinse, repeat.

Someone asked me if I needed a person to shovel my roof. Shovel the roof? Seriously? Apparently, the weight of this much snow can make your roof collapse. More coal in my stocking.

So now there’s more than four feet of snow on the ground, and one would think this is the end of the story.

One would be wrong.

Because four feet of holiday snow doesn’t go away quickly. I hoped it would at least start to melt.

But then it got cold. Really cold.

Below zero for two weeks. At one point fifteen below.

Sidebar: I have always washed my own car, but in this part of the country during winter it is impossible. You go through a car wash because it shoots water on the undercarriage of the car to knock off the salt. So I hit the car wash, got home…

And couldn’t get out of the car. The water from the car wash had frozen the doors, encasing me in a Chrysler ice cube. I had to slam my shoulder against the door a few times to escape.

Back to our story…

The snow hasn’t gone away, and even more snow fell in the coming weeks. Five and six-foot drifts are everywhere. We have shoveled tunnels on the sidewalk, so when anyone walks by it looks like a disembodied head moving down the street.

A funny thing about snow that hangs around a long time. When the sun hits it and melts it a little, the surface becomes an icy crust when it re-freezes overnight. And after many sunny days, the icy crust is so thick you can walk on top of it and not fall through to the ground. This will become important when spring arrives.

Easter is here! The time of egg hunts for little kids, women getting the chance to wear bonnets and pastel dresses, men in summer-weight suits, flowers blooming, robins singing…

There’s still a ton of snow, and it’s still really cold. Egg hunts are indoors. Adults are bundled up in down coats. The robins are no fools, and have obviously figured out this is no time to migrate north. Meanwhile, that icy crust has come into play, preventing anyone from accessing the automatic timers that turn on their Christmas decorations. So here it is Easter and every night reindeer and Santas are lighting up on front yards because they cannot be turned off.

I learned there are four seasons in upstate New York: almost winter, winter, still winter, and construction. Still, winter was the worst.

Memorial Day arrives! The unofficial start of summer! The time of cookouts, swimming at the beach, short sleeves…

It's 39 degrees at my friend’s cookout. I discovered that hot chocolate doesn’t really go with a hamburger.

Finally, it’s June. I started to see patches of grass! Christmas is nearly over.

Every time snow fell, the people at the airport piled it up at the end of the runway. Mount Tarmac had reached the incredible height of 55 feet. Finally, on June 26th, the airport crew broke down the remaining 15 feet to let it melt. 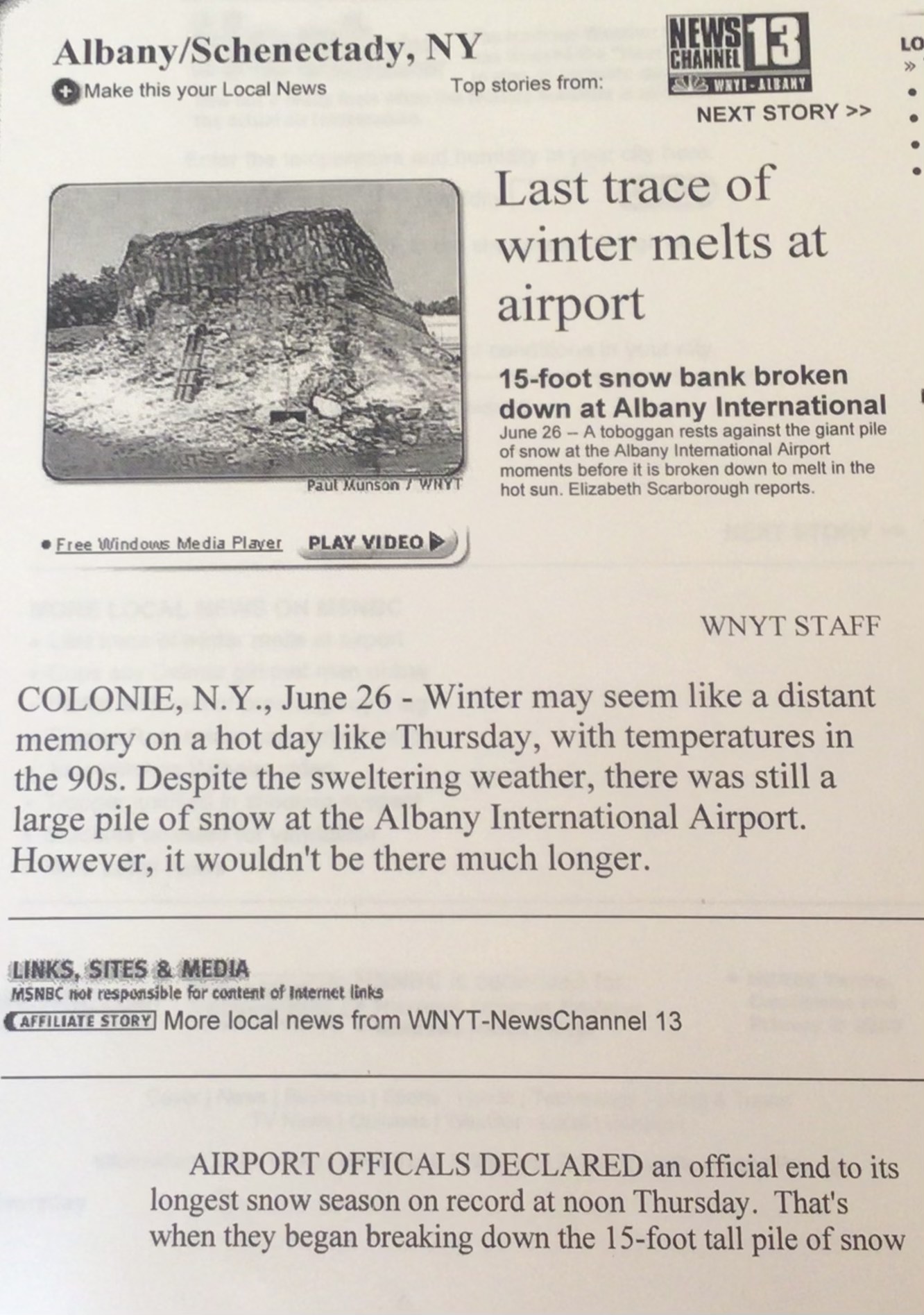 So that was the official end of what is known as The Very White Christmas. The final winter total for our suburb: 107 inches of snow. Don’t bother with the calculator, that’s one inch short of nine feet. I cut the grass for the first time in July, and only had to cut it twice more before it started snowing again. And after one more bad winter in 2003, I sent up the white flag of surrender and we moved south. One of the happiest days of my life was the day I sold my snow blower.

So let me channel Scarlett O’Hara: As God is my witness, I will never shovel snow again. (Though I still get flashbacks watching Die Hard 2.)

Still want a white Christmas? Play the Bing Crosby song and be happy you live in Alabama.

Randy Tatano lives in Brewton and is the author of more than 20 novels, writing political thrillers under the pen name Nick Harlow, and romantic comedies as Nic Tatano. He spent 30 years working in television news as a local affiliate reporter and network field producer.. The views and opinions expressed here are those of the author and do not necessarily reflect the policy or position of 1819 News. To comment, please send an email with your name and contact information to Commentary@1819News.com